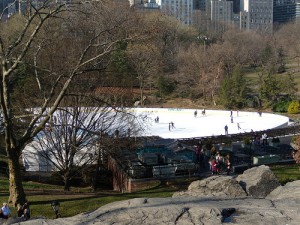 Our last full day today, but luckily it was sunny with clear blue skies, so we could go to Central Park and the Natural History Museum as planned.

We left the room around 8.30am and walked 7th Avenue to Central Park, just stopping on the way for some orange juice. As the museum didn’t open until 10.00am, my plan was to walk up to the museum through Central Park, so could have a look round before we went into the museum.

Once we got up to Central Park street, I wondered whether Aidan wanted to try and have a look in the Apple store, as we couldn’t get in yesterday, and I thought as it’s open 24 hours, it couldn’t possibly still have people queuing for ipads.

So we walked down towards 5th avenue, but when we got there, guess what, people were still queuing outside  , so we didn’t bother trying to get in for the 2nd time.

Instead, we crossed over the road into Central Park, and had a sit down on a bench for a few minutes to watch the world go by.

It was St. Patrick’s day today, so the roads were all being fenced off ready for the parade later that morning. There were already quite a few people walking around dressed in all the green St. Patrick’s day outfits, which was interesting to see.

After a few minutes, we walked further into the park – as we had entered from the south eastern corner, the first thing we came to was the ice rink. Although it was still only just 9.00am, there were already a few people skating round.

The next thing we came to was the Dairy, which is the area children used to come back when the park was first set up, as it was where all the kid stuff like the carousel was located and also, they could get fresh milk there.

Unfortunately, the carousel was closed for refurbishment, so we couldn’t have a look at that which was a shame, but there was lots more to see anyhow.