This is a trip report from my Brother about his and my Son’s trip to New York in March 2012.

This trip was a last minute decision – I was made redundant in February, and my redundancy money came through a couple of weeks ago, so we decided to splash out on a trip to New York, which I’d wanted to visit for a long time.

As it was a last minute thing (I decided to go on the 7th and we travelled on the 12th), we had to take what we could find for flights etc.

We were hoping to fly from Manchester, but looking on the flights to New York, there were very few seats left, and also they were quite expensive, so we checked flights from other airports, and the flights with United from Heathrow were a lot cheaper and also, there were a lot more seats on the flights to choose from, so we decided on the 8.40 flight on Tuesday 13th. We also decided to splash out on the $99 upgrades to Economy Plus for some extra leg room.

As our flights meant we had to travel down to London, we also had to book the train to Heathrow, and a hotel to stay overnight. After looking at the hotels, we decided on the Yotel, as it was inside Terminal 4 where we would be travelling from the following day.

We decided to stay in the Crowne Plaza, as it seemed to be in a good location right in the middle of Times Square, and had good reviews as far as I could see.

The only other things we decided to pre-book before we went were the Statue of Liberty / Ellis Island ferry and the Empire State building, as we had read that these get busy so it was best to book these ahead of time.

Anyhow, that was everything booked, so on Monday 12th we were off to the train station.

Day 1: Travelling to the airport

We caught the 11.04 train to London, which arrived with no problems, we couldn’t get a table when we first got on, but people left the train after Stafford, so we managed to grab a table, so Aidan could charge up his phone.

Got to Euston on time with no delays, we had plenty of time to spare here, as we couldn’t check into the hotel until 7.00pm, so we wandered along to St. Pancras, ready to get the underground to Heathrow. As I mentioned we had plenty of time to spare, so we tried to find somewhere to eat in St. Pancras, in the end we settled on a burger – start as you mean to go on, as there would be many more of those to come in the next week!

We then grabbed some sandwiches etc. to take to the hotel, and even though we were still very early, we decided to catch the underground, as there wasn’t really anywhere to sit in St. Pancras – it’s a very nice station, but there’s not enough seats :).

We arrived at Heathrow around 4.15pm, so we still had 2 ¾ hours to kill before we could get into our room. I phoned Yotel to see if there was any chance of checking in earlier, and the lady on the phone was helpful and bought the check-in time forward an hour.

While we were waiting to check-in, we investigated where check-in for the flight was – It was great, it was literally just up the escalators which were about 20 feet from the hotel entrance and you were right there in departures.

Anyhow, to kill the last couple of hours, we sat in the Wetherspoons which again was only a few feet from the Yotel which was handy and had something to eat and a drink. 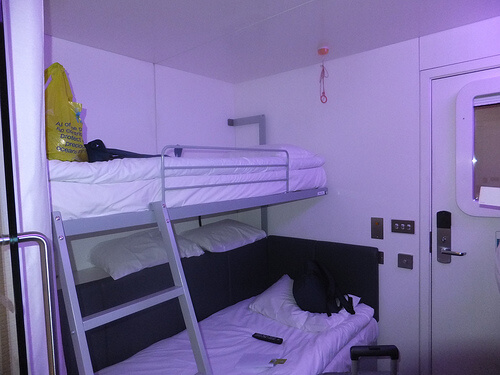 The Yotel was great, but it was certainly different from a traditional hotel room – we had a premium twin room, which basically consisted of bunk beds and a bathroom.

That was it, there was the bedroom, and where the bed finished, there was a glass partition into the bathroom.

The beds were comfy though, and there was free Wi-Fi and TV, so we stayed in the room for the rest of the night.

The light in the room was a bit strange, it was a pinkish / purple colour, which was a bit annoying after a while, so we switched it off and relied on the bathroom light, which as it was so compact, wasn’t a problem.

Anyhow, I can recommend the Yotel if you need to stay at Heathrow, but you wouldn’t want to use it for more than a night, but for one night, it was great, and for an airport hotel, reasonably priced too.

(One thing we were told when we checked in – don’t pull the orange cord – it might look like a light switch, but it sets of the fire alarm :eek:)