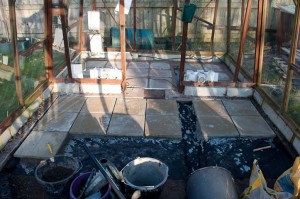 Mid way through the job

This year to try and make the greenhouse better to work in and hopefully stop some of the slugs getting in, I decided to lay paving slabs down inside the greenhouse as well as give it a good winter clean.

Previously I’d simply pulled up the floor matting I had put down and relayed it back down each year. This worked fine but meant if it rained the floor was all slushy under the matting, Not exactly nice to work on. 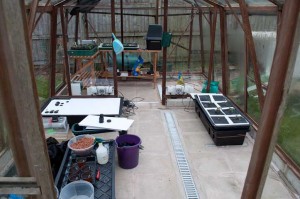 It was quite a job to do the flooring as I’m not an expert at laying flags by any means,
But I’m glad myself and the family did it over winter. It now feels like you are working in a solid structure and is very pleasant.
I also sealed all the side parts to the greenhouse so there are few gaps now for any slugs to get in, I’m sure they will manage to but hopefully not as easily. 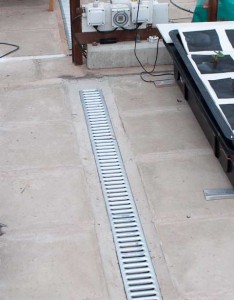 One of the Drainage Gullies

To try and allow some form of drainage but still stop the slugs from getting inside from underneath in the soil, I decided to embed some drainage gullies along side the paving.
Rather than let these just drain into the ground though they are fully sealed underneath, but I’ve put small holes within the gullies and bunged them up with some rubber bungs.
Now if I need any water to drain into the ground I can just pull up the bungs from the holes and then let it drain out and put them back in afterwards.
With hydroponics all the water is within tanks so this should rarely be used.

If the worst comes to the worst with the slugs I can always make the gullies into huge slug traps by filling them with beer, The greenhouse could become a little smelly then though. 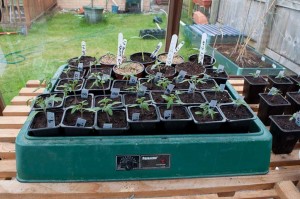 Doing all this work and the miserable weather we have had has meant I’m slightly slower in growing things this year, But have now got some tomatoes and cucumbers well on the way in propagators. Incidentally to save a little extra money, I’ve cut up a plastic sheet I had lying around into little plant labels and have labelled them all with a number.

So I just have a table of numbers which mean different plants. That way I can use the same plant labels each year and don’t have to try and fit all the long plant names onto each label.

This year I have decided to have another go at growing Strawberries hydroponically, I’ve tried once in the past but never succeeded much.
I’m going to try and grow them several different ways to see which ones work. Including an Ebb and Flood setup, An Aeroponic setup, NFT and a bubbler system.
I’ll devote a separate post to each one shortly.