When I was about 19, which is let’s say quite a while ago I decided to build a car, the car in question was a kit car.

A kit car is a car which is built from a kit. The kit usually includes most things you need to build a car apart from major parts such as the engine which are usually retrieved from what is called a donor car. To make it economical to build a kit car pretty much everything you can is pulled from the donor car and used for the Kit.
Although you can use solely new parts to build the car this would make it very expensive, And certainly would have been for a teenager on a low wage like I was. 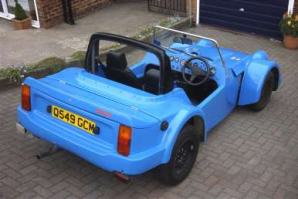 In the case of my Kit which was an Eagle P21 the donor car was a 1300cc MK II Escort, destined for the scrap yard. Although it was quite a long time ago now I can still vividly remember the day the kit arrived on the back of a trailer and left in my Mums back garden. I’m sure lot’s of people had a good look at what was happening that day in the garden.
I can also vividly remember the donor Escort car arriving and spending many a week pulling everything I could from the car to be re-used in a new life.

It took me a whole year to build the car, Spending every day working on it in some way or another, I remember smelling of Swarfega for most of that year. Swarfega is a heavy duty hand cleaner and degreaser and is bright green, So much it nearly glows in the dark. I must have got through tons of that stuff. 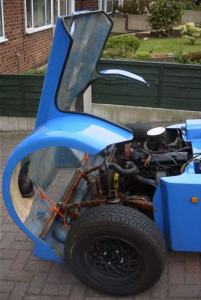 In total the kit cost me about 1500 pounds, And taking into account the donor car costs and things which couldn’t be re-used like seats and wheels the total cost to make the car I think was about 3500 Pounds.
The insurance was amazingly cheap as well, Suprisingly the cost to insure it was only 85 Pounds a year. I guess insurance companies know you will take care of a car if you’ve built it yourself.

For any kit car enthusiasts which think the Eagle P21 looks similar to lot’s of other kit cars, the design was originally a Dutton Phaeton and was sold to Eagle cars near the end of it’s life.

Although I didn’t get to spend as much time in the car as I wanted, mainly due to the English weather. It was so much fun to drive and nothing I have driven since can compare with the raw feeling you got driving it. Weighing less than half a ton means it’s acceleration was quite unbeatable from any other car which only had a 1300cc engine.
Not to mention the amazing looks you got from people when they saw it.

Unfortunately I did one day manage go out for a long spin without checking the oil or water. A naive over confident teenager I certainly was then, I remember it being an overly hot day and having less and less power from the engine. Then suddenly smoke poured from the engine and it gave up. Oh dear, I had blown the engine up, or at least blown it’s gaskets. My uncle who is a mechanic and helped me build the car inspected it and told me it needed a new engine. I was quite red faced and a little sorry for my self to be honest.
But we replaced the engine with another scrap yard cars one and it had a new lease of life again. 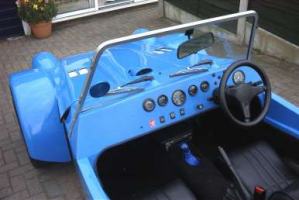 Kit cars have probably moved on a large amount since I built mine, but I enjoyed that part of my life when I spent a long time in the garage just tinkering with a car without a care in the world.

Unfortunately when we moved house there was no where to store the car so I had to sell it. I had so many people interested in it and the first person who saw it bought it there and then. 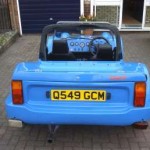 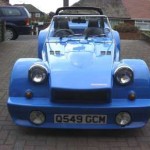 This post is here so I can remember that car of mine, I just wonder where it is now and if it’s still running around the streets.